In this week's Finshots Markets, we take a quick look at the LIC IPO.

Also, if you're interested in reading the weekly wrapup, you can find it at the bottom of this article :)

LIC sells insurance policies. They collect money (premiums) from clients and promise to offer future monetary benefits in exchange. Once they collect these premiums, they invest these monies in stocks, bonds and other financial instruments according to guidelines prescribed by the regulator. And they can do all this thanks to the 1.35 million individual agents that scour the country looking to insure every Indian possible.

No doubt this offers them considerable leverage.

They are the biggest insurance company in India and the 5th largest insurer in the world. They sell 3 out of 4 life insurance policies in the country. They manage assets to the tune of ₹39 lakh crores. In effect, they’re managing more money than the entire mutual fund industry combined. They own 4% of all stocks listed on the Indian stock market and they’re sitting on unrealised gains to the tune of ₹4 lakh crores. They hold more government bonds than the RBI. And according to one UBS report, about 10% of all household savings go to LIC each year. Even the State Bank of India can’t solicit this kind of funds from the general public.

LIC is a behemoth.

Having said that, investors seldom care about past glory. They’ll want to keep an eye on future growth prospects and it’s the only reason why they’d pay up for LIC's shares.

But alas, here we see a few cracks opening up. There’s a marked slowdown on the horizon. Growth in new business premiums is lacklustre and they continue to cede market share to private life insurers. Now LIC will claim that this could be attributed to Covid induced disruptions. They’ll argue that their agents couldn’t spend as much time in the field these past two years and this has had an impact on generating new business. But even if you did account for this anomaly, you’ll see that growth isn’t like it used to be. Especially in urban areas. And this isn’t great news.

Also, LIC primarily markets insurance products that aren’t particularly lucrative. And this can be problematic depending on what side of the aisle you’re on.

When you think of insurance, you’re probably thinking of pure protection products i.e. If there’s a death or a hospitalization, the insurance company pays up. Nothing more, Nothing less. But LIC doesn’t sell these products. At least that’s not where they make most of their money. Instead, they sell policies that could be best described as part insurance, part investment products.

Effectively every time you pay a premium, a small chunk of it will be set aside to offer you death cover (decent payout in case you do die). And the remaining funds are invested across stocks and bonds, the way we described earlier. In this case, death isn’t a necessary condition for the policyholder to gain from this arrangement. They’ll still get some money back after the policy expires and this seeming benefit makes these insurance products extremely attractive to the layperson.

You don’t even need to market it aggressively. The product sells itself.

However, despite the apparent appeal, the margins on these products aren’t great. It’s the pure protection products that are lucrative. So while private life insurers continue to focus on the latter, LIC is still sticking to its guns. Which may not be a problem right now, but could become a bit of an issue as the Indian market matures.

There’s also the fact that LIC ploughs a lot of its surplus back to policyholders each year. This they’re expected to do because they sell a good chunk of what we call participating products — Where customers are entitled to some of LIC’s profits in addition to other policy benefits. However, for shareholders looking to corner a larger part of the surplus, this may not look very enticing. They like non-participating products better— Where customers only get a fixed benefit and no share in the profits. So if you’re buying into LIC's promise that’s something you’ll have to keep an eye on as well — the share of participating vs non-participating policies.

Now usually we don’t do valuations. Because it isn’t a particularly fruitful exercise. But in this case, we feel compelled to touch upon the subject because insurance isn’t like other businesses at all. It’s a totally different ballgame. LIC collects money upfront and then promises to compensate policyholders sometime in the future. The premiums they collect cannot be recognised as revenue and you can’t just expense the figure to derive P&L numbers. It just doesn’t work that way.

Instead, analysts use a figure called the Embedded Value. Think of it as a number that encapsulates the present value of all future profits expected from policies sold and funds accumulated over the years that explicitly belong to shareholders. With Embedded value, you can get a ballpark figure of what the company is actually worth today.

What’s the EV for LIC?

But bear in mind, that’s the value of the company right now. LIC will go on to sell more policies in the future. They’ll collect more premiums, make more money and redistribute it to shareholders. And if you account for this growth, you’ll see that LIC should be valued higher than the ₹5 lakh crore figure we quoted.

Analysts originally pegged it to be in the range of ₹13–14 lakh crores. However, the government has had an epiphany it seems and it has since trimmed the valuation. They are now seeking a value of a mere ₹6 lakh crores. That’s not too far off the embedded value.

With that being said however, when LIC puts up 3.5% of its company for sale, it will suck nearly 21,000 crores out of the ecosystem, if the IPO were fully subscribed. The government is going to make nearly 3 billion dollars from this. And that’s not spare change.

Point of Interest: The Embedded value has seen a sharp uptick this year thanks to a structural change in LICs Life fund, that let's shareholders enjoy a higher share in the proceeds. This technicality is explained here.

Now at this point, we have to confess something. Over the past year or so, we’ve been selling insurance (health & term) at Ditto. It’s given us some insights on what is an opaque industry. And if there’s one key takeaway here, it’s this.

When you’re selling insurance you aren’t selling insurance at all. You’re offering people “peace of mind” — in exchange for a modest sum. It’s why so few people run the numbers or compute returns before investing in a sub-optimal endowment plan. Sure the agents have a role to play here. But people are often willing to commit to this program because the words “fixed returns” and “guaranteed sum insured” evoke feelings that trump reason.

And if there’s any entity on this planet that embodies this spirit in full, it’s LIC. An LIC plan (no matter how badly it's structured) offers you tranquillity. People rest at ease knowing that their money is parked in a government entity that will prioritize the interests of the policyholders above else.

Is this an accurate assessment?

But so long as this perception prevails, LIC will reign supreme.

Perhaps this point is best exemplified by the liberalisation example. Every time the government chose to invite private-sector competition in a lucrative domain, the incumbents in the public sector faltered soon after.

Air India and Indian Airlines made record profits each year until the government opened the civil aviation market to private players. BSNL thrived as a monopoly until the introduction of Airtel and the likes.

But despite the liberalisation of the insurance sector post-2000, LIC’s performance has been nothing short of resilient. Yes, they’ve lost market share and growth isn’t like it used to be. But the company is still putting up a fight. If anything, you could argue that with private sector insurers working on awareness and expanding the market, LIC has remained a tacit beneficiary. The company is still synonymous with insurance in India.

It’s LIC after all!

So let us know. Are you going to invest in LIC or are you going to pass? Tweet your thoughts at us and we'll retweet the best comments. And if you know anyone who'll enjoy this article, don't forget to share this article on WhatsApp, Twitter and LinkedIn.

On Monday we did a story on India's import ban on drones, next we discussed Zomato's bet on Buy Now Pay Later schemes. On Wednesday we talked about the satellite wars, then we discussed Glance and the lock screen opportunity and finally we saw how Disney is trying to reimagine real estate.

An explainer on how to meet your financial goals 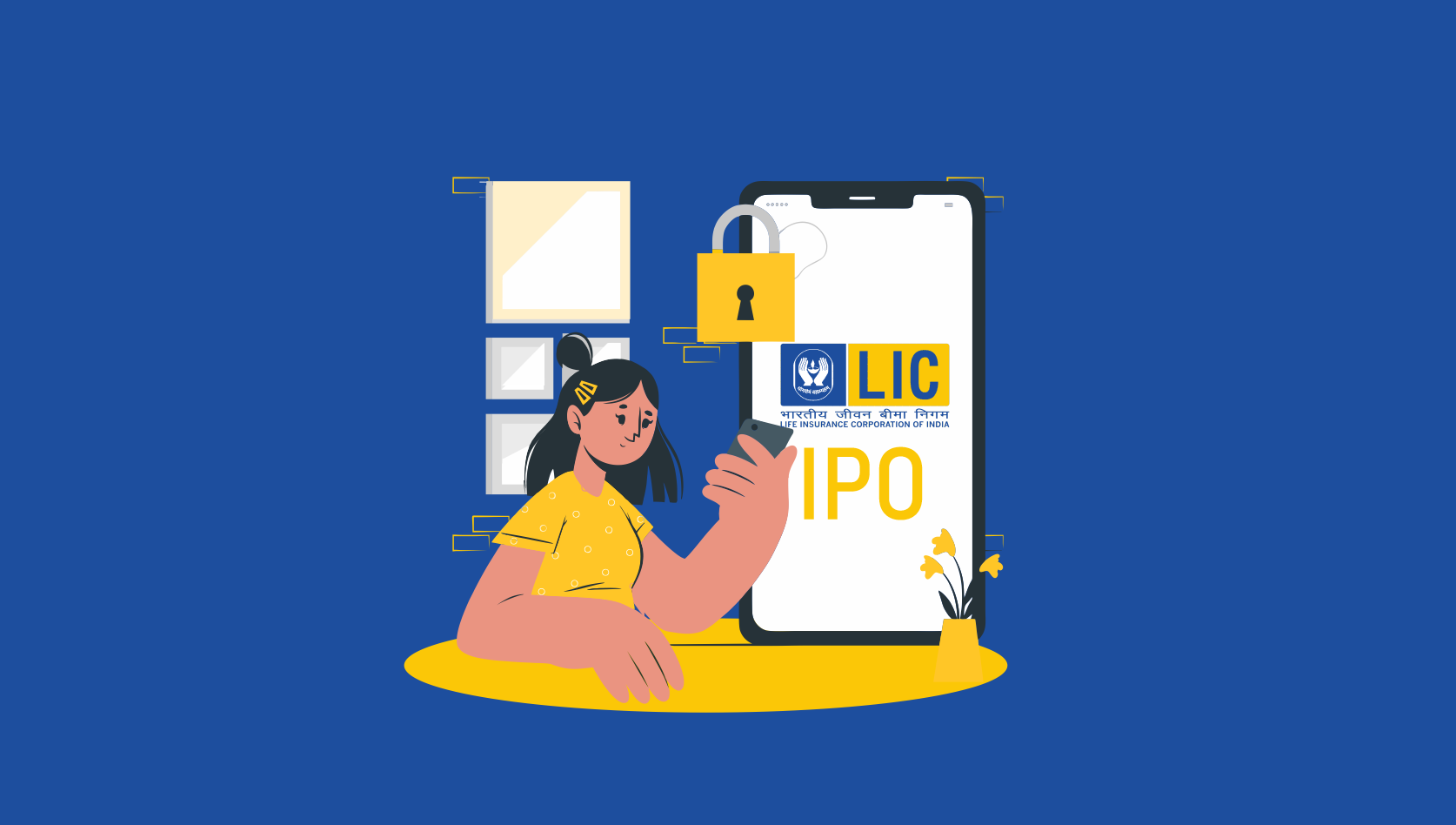 An explainer on the LIC IPO