In today's Finshots brief, we will talk about-

Are foreign universities coming to town?

Every year in August, students across India get ready to pursue their higher education ambitions by boarding flights to far-off destinations. These students range in the lakhs- over 7.5 lakh studied abroad in 2019, compared to some 66,000 ten years ago.

Of course, things are more subdued this year because of the coronavirus. But the numbers are likely to go back to previous levels once things improve. Unless, that is, India’s new National Education Policy (NEP) gives aspirants the chance to get a world-class education right here in their home country.

Unveiled at the end of July, the NEP promised to facilitate the setting up of foreign universities in India. According to it, “A legislative framework facilitating such entry (of foreign universities) will be put in place, and such universities will be given special dispensation regarding regulatory, governance, and content norms on par with other autonomous institutions of India.”

The legislation in question is being prepared for approval by the parliament. And according to the Education Minister Ramesh Pokhriyal ‘Nishank’, there has been a lot of enthusiasm from foreign universities. He says- “Very soon, India will have some of the finest, world-class institutions.”

Well, that sounds fantastic. India already has one of the largest higher education systems in the world boasting almost 990 universities and 40,000 colleges. And yet, our Gross Enrolment Ratio (GER) in higher education is 26.3%- which is dismal compared to China (51%), Brazil (50%), and European and North American nations (80% or more). India also lags behind when it comes to infrastructure, quality of learning, and research investment.

But the hope is that the NEP will change things. As foreign universities make their way to India, they’ll bring with them the benchmark of international pedagogy, a diverse range of new subjects and specializations, a global perspective, and more competition for local players. In turn, Indian students will gain access to better quality education without having to spend exorbitant amounts on studying abroad.

However, foreign universities will only consider coming to town if it's feasible for them. And on that front, India’s notorious bureaucracy may act as a deterrent.

See, this isn’t the first time India has sought to woo foreign universities. In 2010, a detailed Foreign Educational Institutions (Regulations of Entry and Operations) Bill was introduced in the parliament, and so, institutions like Canada’s Schulich School of Business and Italy’s Bocconi University opened Indian campuses. But sadly, the legislation never came though, and these institutions have had to cope with restrictions and cumbersome regulations ever since.

According to Raghunathan of Schulich, the requirements mainly focus on physical infrastructure like acreage of land, canteen and library size, computers per student, etc. He says, “A business school with 300,000 books and journals available online would not cut the ice. But a school that meets the criteria of X physical books or Y journals per student or some such absurd number does. In applying these constraints, our regulations overlook the fact that top international institutions are successful back home because they are more technology and intellectual-capital driven—not so much by physical attributes or very large campuses.”

Another problem was that the bill limited profit-making. Something that definitely wouldn’t fly with foreign universities even this time around. Besides this, institutions will also have to consider things like the challenges of finding local teachers at par with their international standards, the possibility of diluting their brand name, and administrative issues that could arise because of India’s political environment.

So all in all, it’s way too soon to tell whether we'll have more global education within the country.

Is India going back to the office?

Back in March, the coronavirus became a global threat and thousands of workplaces across India asked their employees to work from home for an indefinite period of time. A number of ever-extending nationwide lockdowns followed, forcing these workers to remain at home. Now, six months later, the country has pretty much opened up. However, a lot of offices have decided to embrace remote work until things are completely safe.

So how many Indian workers have actually gone back to their workplaces?

Luckily, there is one way to find out- Google mobility trends. The tech giant collects anonymized data from its apps like Google Maps and has produced a dataset which can be used to track people’s movements throughout the pandemic. BloombergQuint has mapped some insights based on this, and they're quite interesting.

Turns out, between August 19th and September 30th, nationwide mobility to workplaces was still  27% below pre-Covid levels.

Surprisingly, movement across India’s large metro cities is much below the national average. This is because these cities have high infection rates and limited public transportation options. Workplace mobility in Chennai, Mumbai, and Pune is at about half the levels seen in normal times, while mobility in Delhi and Kolkata was a bit higher at  36% and 34% respectively. So yeah, things aren’t quite back to normal yet. But it's improving each day it seems.

Developing a new pharmaceutical drug is an extremely time-consuming and capital intensive process. It (usually) requires years of research, several rounds of clinical trials and millions of dollars worth of investments. And the only way to remunerate the pharma company is to protect the investment through patent protection- that is, restricting other people from copying the manufacturing process of the drug for a defined period of time.

But now that the coronavirus is here, the race to develop a vaccine is on, and the consequences of patent protection have widespread ramifications.

As Moderna’s President Stephen Hoge said, “We’re quite studiously not asserting infringement. We’re doing the opposite of creating that kind of anxiety for folks. We’re not interested in using that IP to decrease the number of vaccines available in a pandemic.” Good to know!

Last year, Amazon bought a 49% stake in one of Future's unlisted firms with the right to buy into flagship Future Retail after a period of 3- 10 years. But in August this year, Future group agreed to sell its retail, wholesale, logistics and warehousing units to Reliance, causing the e-commerce giant to slap them with a legal notice. Know more.

When India’s nationwide lockdown was imposed in March, palm oil imports from the world’s biggest importer (India) dropped in tandem. But now, purchases are set to climb in October as the festive season approaches. Read more.

Yesterday, the World Bank projected that India’s GDP will plunge by 9.6% in FY21, a significant downturn from its June forecast of a 3.2% decline. Here’s why.

How does LIC manage its ₹30 lac Crore assets? 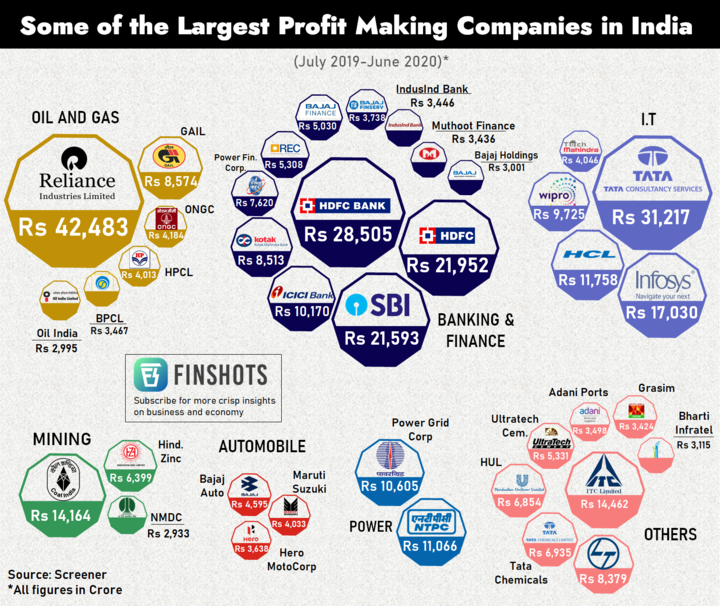 Some of the largest profit-making public companies in India.