You always kept hearing whispers about Uber. How they used subversive tactics to become a ride-sharing behemoth and how they consistently broke rules and regulations to have a leg-up on their competitors. Until now, there hasn’t been substantial evidence to back most of these allegations. But that changed on Monday when global media broke the most incredible story — Uber Files.

If you haven’t been keeping up with the news of late. Well, here’s what happened.

A former Uber employee Mark MacGann leaked over 124,000 confidential documents including texts, emails, invoices, and presentations to “The Guardian” — a publication based out of the UK. And The Guardian in collaboration with journalists from around 40 media companies spread across 29 countries has laid bare the chaos inside Uber’s meteoric rise.

So what did they find?

In 2016, as Uber began expanding across France, licensed taxi drivers (the old guard) took the streets to protest against taxi-hailing apps. Unfortunately, the protests took a violent turn and people got hurt in the process. And you’d think that Uber would be upset about all this. But the violence was exactly what its founder and former CEO Travis Kalanick wanted. In fact, he felt that the threat of violence against Uber could be used to drum up support for the company instead. And even said, “Violence guarantee[s] success.

Elsewhere, Uber also deployed what is called a kill-switch. Yes, a kill switch. See, this was a company that routinely broke local laws, and the executives knew very well that they were under increasing government scrutiny — across the globe. And with such intense scrutiny came a different kind of pressure. Pressure of  surprise raids. So in a bid to protect themselves from these exigencies, they deployed a kill-switch.

Here’s how it worked.

Imagine government officials wanted to turn the Uber office upside down to find incriminating evidence. On such occasions, the natural course of action would be to co-operate. But what if you blocked access to all information and servers with the flip of a central switch?

In which case, the authorities would have to reach out to the central office for more information. Then Uber would have enough time to stonewall authorities and figure out a strategy for cooperation. Maybe even hide evidence.

And it seems that Uber’s then-CEO personally ordered the use of the kill switch in 13 different instances at least. Including India, Amsterdam, Montreal, Hong Kong, and Paris. The Indian reference, in particular, comes from confidential emails dated February 10, 2015 — two months after the horrific Uber rape incident in New Delhi.

And while you would think that this is bad in itself, let us also remind you that the company tried to pin the blame on India’s licensing regime as opposed to taking more accountability.

Then there’s stuff that looks like it’s straight out of a spy movie — smokescreens known as Greyball.

As we already noted, regulators were always out to get Uber. And this became an increasingly expensive affair. Every time the police caught an unlicensed driver, Uber lost money. And every time an official gathered evidence against Uber, it delayed progress. So they designed something ingenious. They used information from the app to shortlist probable “regulators.” They honed in on location data and picked out people operating in and around police stations, for instance. Once through with this scheme, they showed these users a fake version of the app that had only “phantom” drivers. These were just black dots moving around the city, but they weren’t real. So if you booked a cab using this fake app, your driver would never arrive.

In other cases, they would cordon off entire areas, to show everyone there a fake view of the app, if they suspected regulatory action.

They even paid economists to publish favourable reports. One egregious example comes from the French economist Landier who was paid a whopping 100000 euros in exchange for publishing an academic paper. In the study, Landier and his co-authors concluded that Uber created new jobs, offered decent payouts to driver-partners and had become an agent in battling unemployment in the country. The study was then quoted in multiple news reports in France and Uber used the study to lobby against a regulatory clampdown.

And finally…remember the whistleblower MacGann? Well, he was a lobbyist at Uber and his job was to lobby the political top brass to introduce regulations favourable to Uber. Now more often than not, politicians are expected to disclose private meetings with multi-national corporations like Uber. But when you realise Uber officials had 12 undisclosed meetings with representatives of the European Union, you have to raise some eyebrows no?

In any case, Uber for its part isn’t making any excuses. They’ve said and we quote — “We have not and will not make excuses for past behaviour that is clearly not in line with our present values. Instead, we ask the public to judge us by what we’ve done over the last five years and what we will do in the years to come.”

So yeah, maybe Uber has turned a new corner. But that won’t stop people from scrutinizing everything the company does from here on in.

Breaking things and moving fast does have its consequences it seems.

Uber isn’t the only entity that’s proficient in subversionary tactics. Your friendly insurance agent might just be as cutthroat, if not more. Let me give you an example.

Imagine you’re trying to buy a health insurance policy from an offline agent, And imagine this chap is a family friend of sorts. Now you try and strike a deal with him. You tell him that you’re going to buy a policy off of him if only he offers you a special discount. But the thing about insurance is that discounts are rare. Agents can’t just chuck in a discount to convert a sale. In fact, there are very strict rules surrounding the discounting bit alone. So what does our enterprising agent do in such a case? Well, he deploys a very sinister plot. He fills out your application form. But only, he takes your age and cuts it down by 10 years. 56 instead of 66. 40 instead of 50.  It looks like an honest mistake, but it’s not. The premiums meanwhile drop substantially and you are now enticed to make the purchase.

Health insurance companies seldom verify details at this stage. So your application goes through and you get your policy issued. But when you make a claim, insurers will ask you for identification and make sure your stated age lines up with how old you really are. And if they find a discrepancy here, they’re not going to pay up. So always make sure to read your proposal form and verify every single detail once your policy is issued. Because even if it is an honest mistake, it can cost you very dearly.

And also if you want to avoid this silly business altogether, just speak to us at Ditto. We will sort you out. 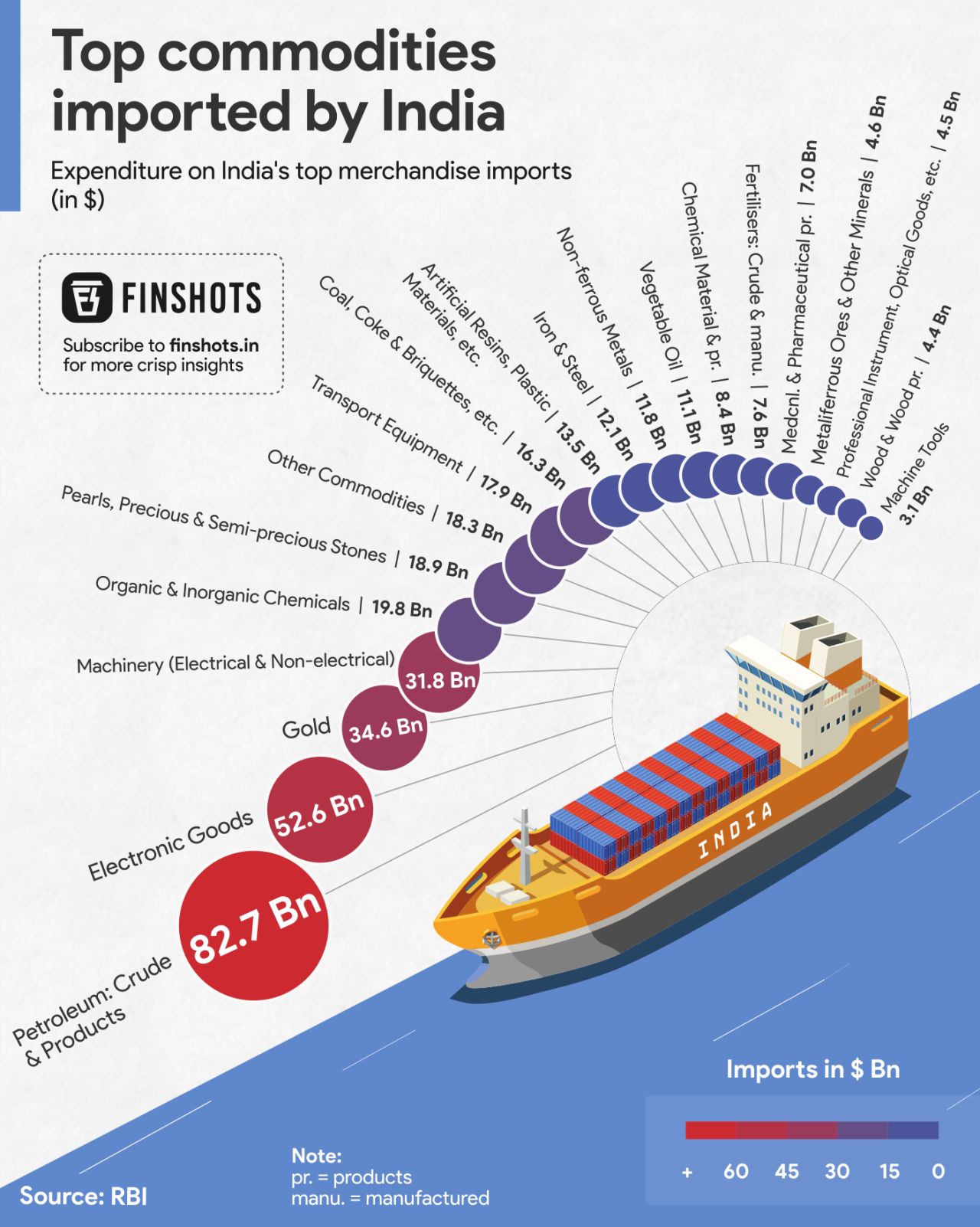 Here's an infographic on the top commodities imported by India (As of FY21)!