"The Adani Group is a house of debt." This is what research firm CreditSights said back in August*.

And they had good reason to be sceptical — the overall debt levels of the group had soared from ₹1 lakh crore to ₹2.2 lakh crores in the past five years. All thanks to its massive expansion spree — into cement, airports, and green energy. Adani needed money to fuel this ambition. And they needed to borrow a lot of money.

But that’s just the start. The group plans to pump an eye-watering sum of ₹12 lakh crores ($150 billion) into its myriad businesses over the next decade.

And if you think about it, most of these ventures are quite capital-intensive. Not just to set up, but even to run on a daily basis. And if it’s perpetually financed by debt, well…the interest burden can get out of hand pretty quick.

Now Adani’s a pretty shrewd businessman. He knows that fuelling his ambitions through debt alone isn’t a sound idea. It could all collapse if the tide turns against him.

And that’s exactly what the group has been up to.

In April, Adani Enterprises Ltd (AEL) raised over ₹7,500 crores in equity. They’d convinced one of UAE’s largest companies to back AEL. And they’re now doubling down on that effort and reaching out to other pension funds and sovereign wealth funds (owned and run by countries) in Canada and the UAE too.

But Adani isn’t happy with institutional money alone. He wants money from you and me too!

That’s right! Last week, AEL announced its plans to raise a massive ₹20,000 crores in equity capital. And a large part of this will come from us, retail folks.

Now before we get into the ins and outs of this fundraising process, there’s something you must know about AEL — it is an incubator for the Adani Group’s ambitions.

Well, they’re all under the umbrella of AEL.

So you can see where the money will all go.

Anyway…how will this money be raised?

Through an FPO or a Follow-on Public Offer. Just think of it as an IPO but for companies that are already listed. The company issues new shares that institutions or people can buy. In order to woo potential investors, the new shares will also be issued at a lower price — typically around a 20% discount. After all, without a discount, why would an investor bite? They could simply buy the shares directly on the NSE or BSE, no?

And when new shares come in, it dilutes the shareholding of the promoters. So for instance, if the Adani family held 75 out of 100 shares earlier, after the FPO, it’ll own 75 out of 110.

So yeah, there’s a window to buy the shares. There’s a discount. That’s how FPOs work.

And the ₹20,000 crores FPO will be the largest ever in Indian stock market history!

But like we said, despite its apparent scope, the point of the FPO is simple — to reduce AEL’s dependence on debt.

Here’s what its CFO Jugeshinder Singh told Bloomberg and we quote, “We have done strategic capital [big instituions]. The next capital is patient capital. Indian mom and pop investors invest for their children and grand children.”

Okay, the patient capital idea seems a bit farfetched, to be honest. Are people buying shares in Adani today actually thinking about an intergenerational wealth transfer? We don’t know.

But if you read between the lines, you’ll find another picture emerging — The folks at Adani headquarters are trying to appeal to the public.

Okay. Now everyone knows that Adani Group stocks have been on a tear for the past couple of years. Look at Adani Power for instance. It has jumped by 550% since January 2021. Adani Total Gas has soared by 900%. And AEL is up by ~700%. Meanwhile, the benchmark Sensex has risen by a measly 30%.

But in that mad rush to the moon, one complaint has cropped up time and time again — that Adani stock prices were being manipulated.

You see, many Adani stocks had a low free float. What this meant was that the public shareholding in most of the companies was negligible. For instance, in March 2022, only 8.50% of AEL was in the hands of the public, mutual funds, and domestic investors. The rest of it was held by the Adani family, their associates, and some random foreign investors.

So the naysayers allege that since only a select set of people held the stock, the prices can inch upward without much friction.

Now, by opting to make more shares available to the public via the FPO, Adani’s opening the doors for more retail investors to join the journey. It broadens the shareholder base. And maybe, it could kill those complaints of price manipulation as well.

Hold on, there’s one more thing…

You see, FPOs aren’t quite common in India. According to The Ken, there have been just 4 FPOs in the past 10 years.

Instead, companies in India seem to prefer something known as a ‘Rights Issue’. In fact, there have been 150 Rights Issues in the past decade. Remember, when Reliance Industries raised ₹50,000 crores a couple of years ago? Yeah, that was through a rights issue.

So, why is Adani choosing the FPO route?

Well, it’s probably because its structure works to Adani’s advantage.

You see, in a rights issue, existing shareholders are given the first chance to buy new shares of the company. In a way, it’s like rewarding them for their patronage and for being a part of the company’s journey. But if these existing shareholders feel that they don’t want to buy new shares, they can simply sell this rights ‘opportunity’ to someone else and pocket the money.

So let’s assume that AEL launched a Rights Issue. In that case, the Adani family would actually have to participate. Because if they said, “No, we won’t participate. We will sell our ‘rights’ to someone else,” that would look really odd, wouldn’t it? People will question why Adani isn’t willing to put his own money and bet on his own company!

So yeah, the FPO offers a way out to Adani. There’s no compulsion on the family to buy the new shares.

And this actually ties in with something else the CreditSights report pointed out — they looked at the Adani Group stocks and found that Adani and his family haven’t been injecting more equity capital into the companies. Their own money isn’t going in anymore. All the money is from external sources.

And sure you could argue and say that “Hey, Adani’s already got a lot of his wealth tied up in stocks of his companies. Why would he want more?”

But there are still things for investors to chew on in the lead-up to the record-breaking FPO, no?

*CreditSights revised some of their calculations a bit later but still voiced concerns over the debt pile Adani was accumulating.

Ditto Insights: Why you should buy insurance with your first salary 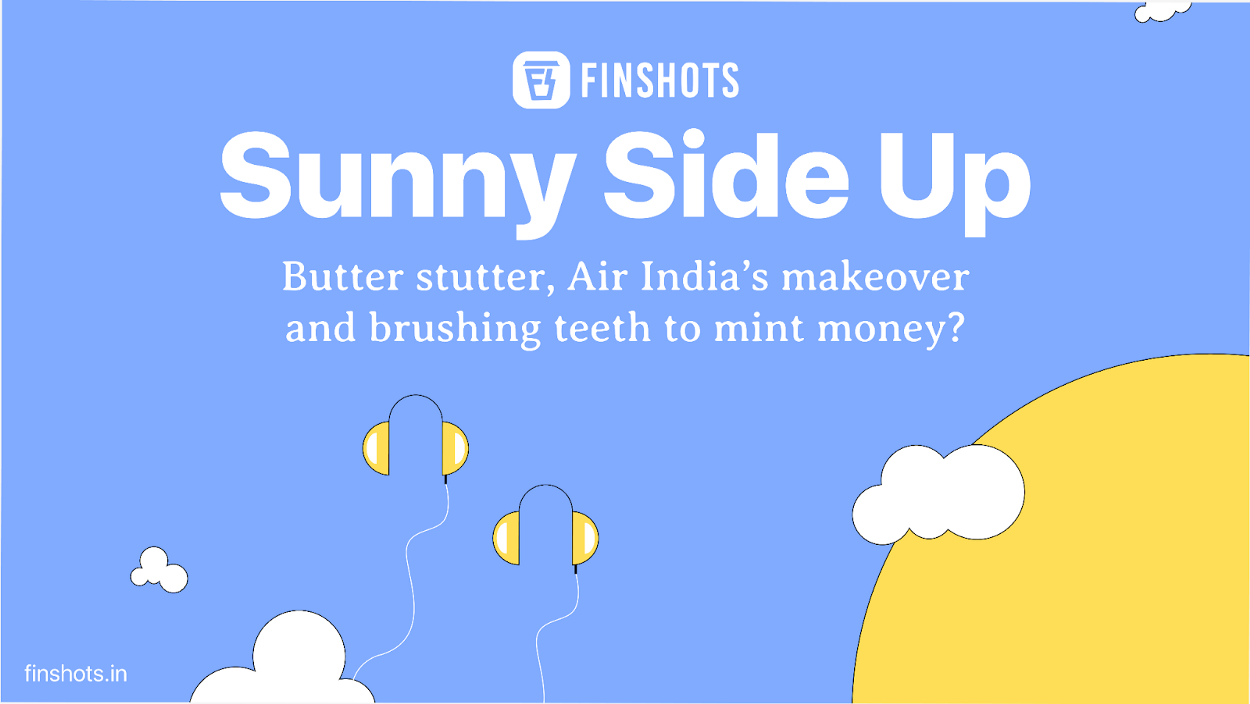 A sunny side edition where we talk about butter issues, air India's makeover and the correlation between income and your brushing habits 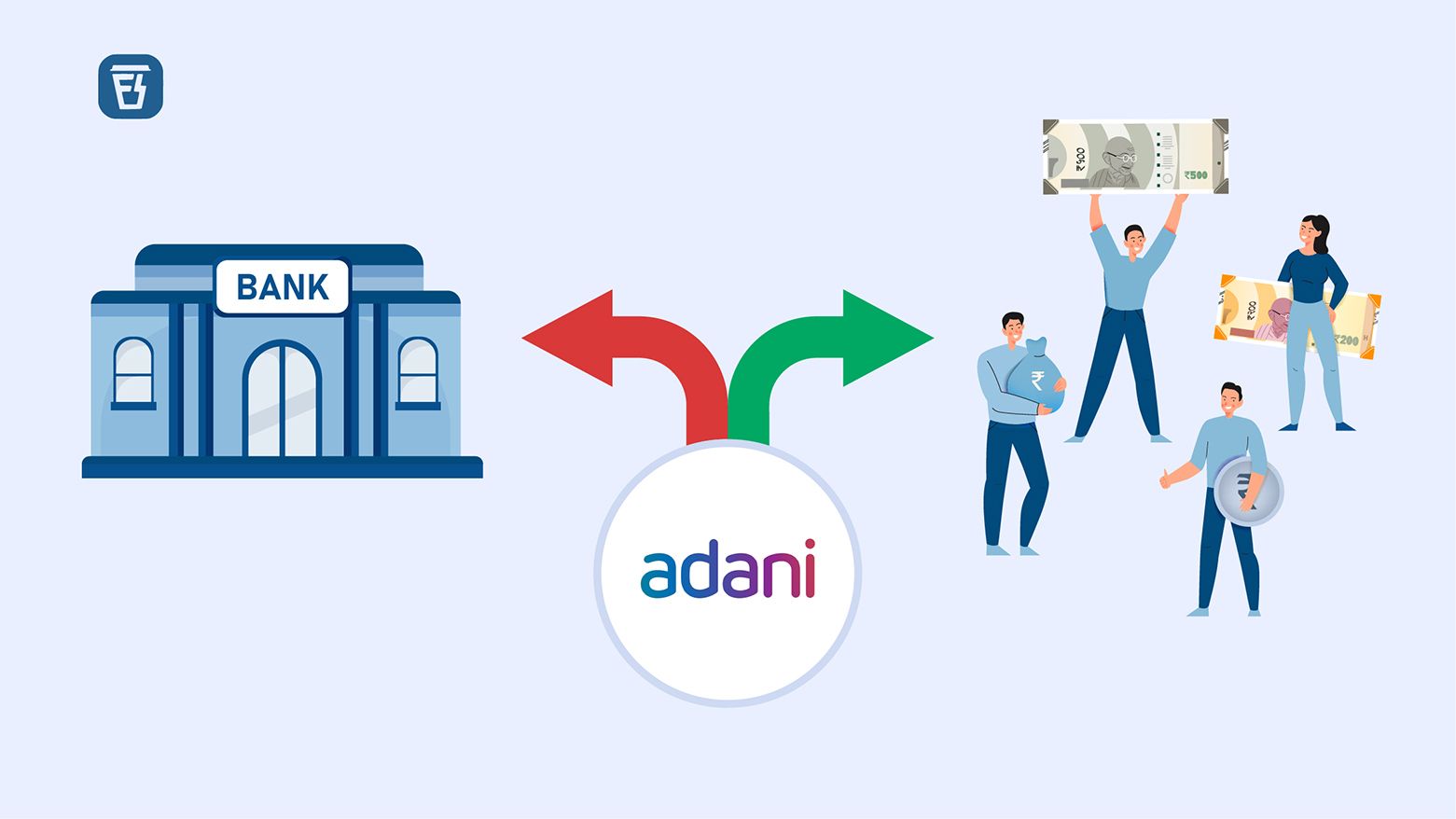