And hey, if you want insightful stories like these delivered straight into your inbox, subscribe to Finshots. All things business and finance in just 3 minutes every morning. Click here.

On Thursday, Fortis Healthcare’s shares crashed by 15%!!! It was the biggest single-day fall since 2008.

The Supreme Court ordered a forensic audit on a particular transaction from 2018. And this wasn’t just any transaction. This was the $1.1 billion acquisition of Fortis. At the time, IHH Healthcare, a Malaysian company decided to buy out Fortis because it saw an opportunity to make a dent in the Indian market. However, things didn’t go according to plan and if you’re still wondering what’s going on here, don’t fret. We will take it from the top.

The year was 2001. And the Singh brothers — Shivinder and Malvinder — had an itch. They wanted to change the face of healthcare in India. They had a vision for what a hospital should be — How it should look, how it should feel, and how it should treat its patients.

Now bear in mind, they already had a flourishing family business in the pharmaceuticals sector. But they wanted to forge their own path. So they set up Fortis Hospitals.

And it was a runaway success.

In 2005, the company acquired Escorts Heart. In 2008, they acquired Wockhardt Hospitals. And by 2011, it had 52 hospitals across the country.

The Singh brothers even sold their stake in the pharma business to chase their ambitions here — in the healthcare industry.

They were the toast of the town!

But then everything came crashing down. There were allegations of fraud — suggestions that the brothers had siphoned off over ₹400 crores from Fortis Hospitals. Also, there were dark clouds looming over Religare — an NBFC floated by the Singh Brothers. It was alleged that they’d used NBFC funds to settle over ₹2,400 crores in personal liabilities.

Then in 2018, the auditors refused to give the company a clean chit. And even when they finally signed off on the accounts, they laid bare all the problems plaguing the company.

Meanwhile, there was a rift emerging between the two brothers. For over 15 years, the Singh brothers were like two peas in a pod. But with all the accusations flying around, Shivinder took his elder brother to court after claiming that he was as much in the dark as anyone else when it came to the accounting malfeasance at Fortis.

Meanwhile, the company was at the precipice of defaulting on its obligations. And fearing this eventuality, the lenders (banks) took over shares that the Singh brothers had pledged.

Fortis was soon put on the chopping block.

Manipal Hospitals made an offer. They thought they’d snag the hospital for a bargain. But shareholders weren’t happy. So the group raised the bid by 20% to $933 million.

But then came IHH Healthcare. They were willing to offer a substantially larger sum of money — $1.1 billion for a 31% stake. The deal looked solid.

Now if you read our story on the NDTV-Adani drama, you’ll know that the moment someone buys a large stake such as this, the rulebook mandates them to make something called an “open offer”. They have to offer to buy a further 26% of all shares from other shareholders.

So IHH Healthcare made an open offer and it looked like everything would work out in the end after all.

But then, another twist.

Remember how the Singh brothers came from a family dabbling in pharmaceuticals?

Well, that company was Ranbaxy Laboratories. Ranbaxy was originally a pharma distributor set up by two cousins Ranjit and Gurbax (hence the name!) But when these founders couldn’t come good on their debt obligations, a gentleman by the name Bhai Mohan Singh bought the company. Bhai Mohan Singh happens to be the Singh brothers’ grandfather. And at one point, the company was among the top generic drugmakers in the world.

See, Ranbaxy has been mired in controversy ever since an employee blew the whistle in 2003. He accused the company of faking results. Results proving the efficacy and safety of prospective drugs. Accusations flew thick and fast over the next couple of years but the company kept churning out the pills. And in 2008, the Singh brothers neatly offloaded their 34% stake to Daiichi Sankyo, a Japanese pharma company, that paid over $2.4 billion for the shares. They even allowed Malvinder Singh to continue as the CEO.

But Daiichi would soon regret this acquisition.

You see, those claims of fraud by the whistleblower? Yeah, it turned out to be true! A few years later, Ranbaxy admitted to the courts that they’d sold adulterated drugs. They were guilty! In fact, they fabricated data for over 200 drugs and fooled regulators in 40 countries.

You can imagine that there were repercussions. But now that Daiichi Sankyo was the owner of Ranbaxy, it found itself in hot waters. In 2013, after spending billions in acquiring the company, Daiichi Sankyo had to dip into its coffers again. It had to cough up $500 million to settle the fraud case at Ranbaxy.

And they were seething. So Daiichi went after the Singh brothers. They claimed that the duo knew exactly what they were doing when they decided to sell their stake in Ranbaxy. And they took the matter to a court in Singapore, seeking compensation.

The courts sided with Daiichi Sankyo and in 2016, ordered the Singh brothers to repay $500 million in damages to the Japanese pharma giant.

But it never saw a dime.

However, a few years later when the Fortis-IHH deal was announced, Daiichi Sankyo saw an opening.

They went to the courts once again, seeking a stay on the deal until they were rightfully compensated. And the courts agreed. In December 2018, the Supreme court put the IHH-Fortis open offer on hold. But people were still hoping for the deal to go through eventually. However, now that the courts have ordered a forensic investigation, it seems that the deal may be in jeopardy after all.

This explains why investors have been jittery about the whole situation and hopefully, we did a decent job of summarizing everything for you.

Ditto Insights: Buying term insurance until the age of 99?

Well, true and if I were a really good salesman I would urge you to buy a term plan until 99. This way you pay a higher premium, and I get to keep a higher commission. However, I am not a salesman. I am an advisor. And being an advisor, I can only tell you this much — “Don’t do it.”

Think about it. Do you think an insurance company will just leave money on the table if they know they’ll have to certainly pay out 1 Crore?

No, they won’t. They’ll push the premiums way higher. Also, I am 29 right now. After 70 years, that 1 Crore won’t be worth all that much. In fact, if you adjust for inflation, you’ll see that it’s probably worth very little if anything at all. So you’re not getting a bonanza here.

Finally, ask yourself this — Why are you buying a term insurance plan?

So that your dependents can have a fallback option in the event of your demise. Who are you protecting at the age of 90 huh?

Also, if you want to know more trips and tricks, involving term insurance, don’t forget to talk to our advisors.

A quick announcement: We're giving away a Fitbit watch on Ditto's LinkedIn handle!! You can participate using this link. An explainer on why the British Pound is losing value 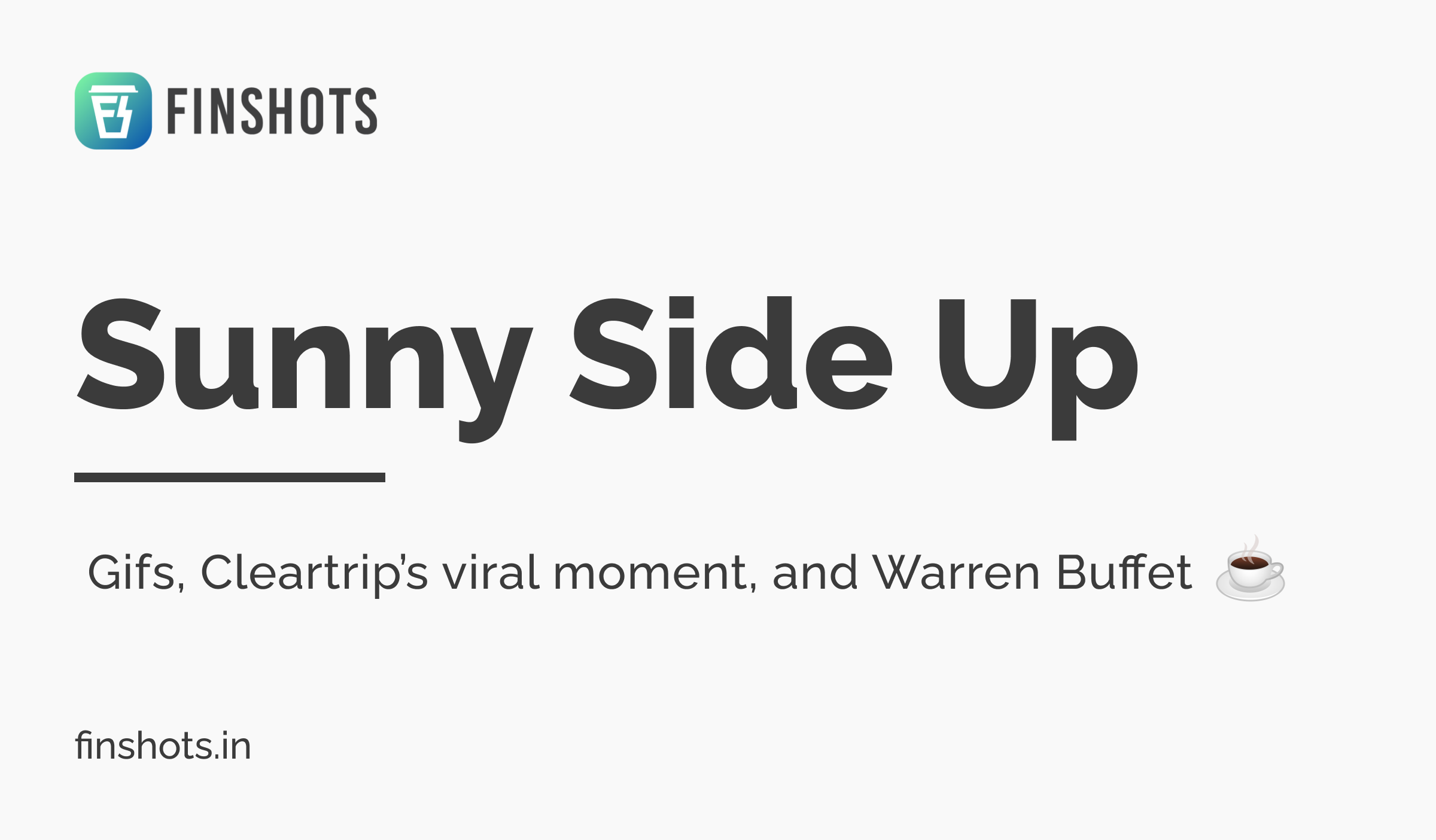 Sunny Side Up : GIFs, Cleartrip’s viral moment, and Warren Buffet