In today's newsletter we cover a special issue on the fraud that shook parts of US markets amidst the Coronavirus turmoil.

Fair warning- This will probably take more than 3 mins to read. But I promise you, it will be worth your time.

Luckin Coffee was founded in Nov 2017 and immediately set off on a quest to topple Starbucks from its perch and become China’s favourite coffee chain. An online first service for young Chinese Millennials who ordered coffee on the go. A next-gen company that used data to target their customers and offer them a more meaningful experience. But most importantly, this was supposed to be China’s answer to Starbucks.

And for the most part, they did what they were supposed to do. Granted, Luckin’s coffee wasn’t the best, but it was growing at breakneck speeds. In fact, within just 3 years of opening its first store in Beijing, the company already had close to 4,500 stores in China, went public (IPO) and was expected to hit revenues of close to $700 million for FY2019.

This stock was an investor’s darling by all accounts which is why it surprised so many people when the company reported a few days back that “some employees” had fabricated as much as $310 million in sales last year.

Ergo, the reported revenues were a sham. The company is involved in a fraud and nobody knows where Luckin is headed next.

The big story today is how a short-seller —Muddy Waters Research called the fraud 2 months ago, much before anybody suspected Luckin of fudging its numbers.

But before we get to the heart of the story, a note on short selling.

The Sacred Art of betting against a stock

The theoretical mechanics of short selling is rather simple. You borrow a certain number of shares of a company from your friendly neighbourhood broker and you sell these shares at the current market price — say Rs.100. At some point in the future when the stock price dips (to Rs.80), you buy the company shares from the open market and return it to the friendly neighbourhood broker. The transaction is settled and you make a decent profit (of Rs. 20).

So if Muddy Waters somehow chanced upon the fraud and the suspect transactions, they could make a lot of money by short-selling the stock. (Assuming that the stock loses its value when investors eventually find out about the fraud)

However, there is a catch here. If the stock price goes up, there is no real limit to the total amount of losses that you could potentially accrue. You could bankrupt yourself if you are not careful. Which is why when big fund managers bet against a stock, they want to be absolutely sure of their thesis.

So why was Muddy Waters so convinced about this bet, you ask?

Well, because they had access to an anonymous report. Not just any anonymous report, but an 80-page demolition job rife with facts, figures, and beautiful investigative work. It’s like reading the memoirs of Sherlock Holmes. Only there’s no killing here. And we are looking at accounting statements instead of crime scenes.

So brace yourself, because things are going to get rough…

Once you eliminate the impossible, whatever remains, no matter how improbable, must be the truth- Sir Arthur Conan Doyle

A game of cat and mouse

The premise is rather straightforward. If Luckin Coffee is, in fact, fudging numbers, you should be able to empirically test this hypothesis by observing their store-level order flow pattern and stack it up against the company’s claims. Sort of like walking into their store and seeing if enough customers are actually buying their coffee. The only problem with this little scheme is that Luckin has close to 4,500 stores. So you can’t test this hypothesis with a bunch of college kids. You need an army of volunteers covering multiple stores across China over an extended period of time.

So what does Team Anonymous do? Well, they put together close to 11,260 hours of store traffic video captured by 92 full-time and 1,418 part-time staff across 52 cities to monitor Luckin stores for an extended duration.

And here we have our first few clues. Anonymous is no schmuck. Whoever commissioned this little project is likely spending millions here. Is it a hedge fund trying to mobilize evidence against Luckin? Maybe… Is it some research firm in china trying to put together the million-dollar report (with the obvious hope of selling it to many other funds)? It’s possible… Is it Starbucks trying to rattle a Chinese competitor? We don’t know.

But what we do know is that the evidence is damning. Based on video footage analysis (of customers walking in and out the door), Anonymous claims that Luckin was inflating the total items sold per store (every day) by as much as 80%.

However, there is a problem. This number does not tally with the receipts their volunteers are collecting on a daily basis. At least not initially.

You see, each Luckin order is paid for online (and the coffee collected offline by delivery personnel or the actual customer) and the receipts in each store carry a three-digit number that’s supposed to serve as a barometer for the staff to keep track of the orders. So if the first customer is served order number 1, the 500th customer will likely have the number 500 printed on his purchase receipt. You get the idea.

So if someone walks into the store at the end of the day and sees 300 printed on his receipt, it’s likely that the store recognised 300 orders that day. But like I said, these numbers weren’t tallying with video evidence. So what gives?

Well, it turns out Luckin was deliberately jumping orders (skipping order numbers) to give the illusion that they were doing more business. Here’s a screenshot of company executives asking store-level employees to ignore the discrepancy.

As Anonymous states in the report

“Luckin doesn’t necessarily have to jump orders to commit fraud — they can simply fabricate more orders in their financial records. However, here is the clever part: company management likely thought about the possibility that more and more investors and data firms were starting to track their order numbers themselves as part of the due diligence process, so “jumping orders” is a simple workaround.”

Plus, we are not talking about a few hundred receipts. We are talking about receipts from more than 10,000 customers in 2,213 stores across 45 cities. So the sampling is adequate.

And Luckin wasn’t just fudging order numbers, they were also overstating their average selling price (on each order). This, they had to do because the company had claimed a few months earlier, they had achieved store level profitability. Meaning if you were to treat each store as a separate silo and tally up the revenue and the expenditure incurred, you’d see that the store would turn a profit. Unfortunately, to back that claim, they’d have to up the average selling price alongside the total order tally.

Why not just add more orders to the mix you ask? Well, that would be okay. But at current price levels, they could only achieve store level profitability by selling 800 items per store per day. That would mean too many orders and it would inevitably raise a lot of eyebrows. So overstating the net average selling price is quintessential to the fraud.

And they did not stop at that. According to Anonymous, Luckin was also simultaneously overstating its advertising expenditure and rerouting the money to recognise it as revenue. Sort of like paying your friend a 100 bucks and asking him to buy 5 coffee cups (worth Rs. 20 each) off of you. Granted, you don’t make a profit here. But you can still whip up revenue out of thin air and since Luckin’s growth prospects were heavily based on its exponential growth numbers, profitability was the last thing investors were worried about.

But wait, how did Anonymous find out about the ad expenses in the first place. You can’t use volunteers to track this stuff, can you?

Well, no. They did not use volunteers. Instead, they used a third party market research firm that happened to track total media spends by large corporations like Luckin. So, CTR Market Research tracks ads shown across multiple mediums — print, electronic, etc. and then uses the average listing price (on each platform) to arrive at a ballpark number (of total ad spends). While Luckin’s ad spends were in line with CTR’s numbers for the first half, last year, there’s a sudden divergence after the IPO.

Now on any other occasion, you could perhaps chalk this divergence to chance, but not now. Not when you’ve seen so many financial shenanigans already.

And the final nail in the coffin went in once Anonymous started tracking revenue contribution from products outside of freshly brewed coffee. Now bear in mind, Luckin had made some bold claims about how revenue from other products (like juice, snacks, etc) now formed about 23% of the company’s revenue (up from 6% a few months ago). Unfortunately, they couldn’t tie all the loose ends.

You see, Chinese authorities levied a 6% Valued Added Tax or VAT on freshly brewed coffee. However, the same VAT rates weren’t applicable to other products. Usually, these things carried a VAT rate of almost 13%. So if Luckin was, in fact, selling so many other products as it claimed, then their VAT bill ought to be substantially higher than previous months — all of which can be independently verified through tax statements filed with the government.

And guess what the statements show? No increase. And that was that.

Actually, not quite. The report also talks about shady management practices, casts aspersion on top executives and systematically obliterates any claim about the business being sustainable.

And once Muddy Waters Research got a hold of this report, the stage was set. Luckin was bound to go under. And within 2 months of the report becoming public, the company admitted the fraud, Luckin’s stock price tanked 80% and the company’s very existence is now under threat.

So that leaves us with one final question. What does one take away from Luckin’s story, especially if you are an investor (or an aspiring investor).

I suppose the only thing you can take away from this story is that tall claims warrant great skepticism. Meaning — the uncle who claims he can foresee the future by squeezing a ripe lemon. He’s probably screwing with you. And that expert who claims he can predict stock price movement using the Sun’s position relative to Jupiter. Probably delusional. And all those companies that keep telling you they are seeing exponential growth coming in from all corners.

Maybe, just maybe, they are plotting it on an excel file.

If you know someone who should be reading about Luckin Coffee and the anatomy of fraud, share this Finshot on WhatsApp, Twitter, and LinkedIn. 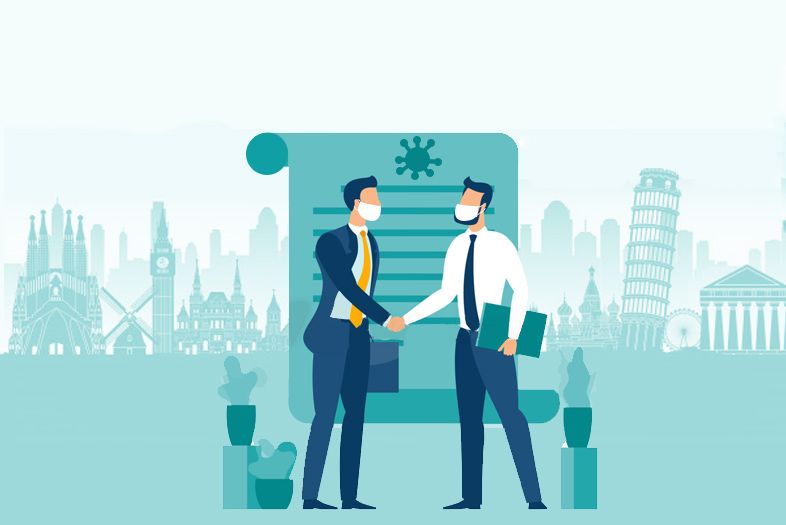 The resurgence of Eurobonds but with a new name. 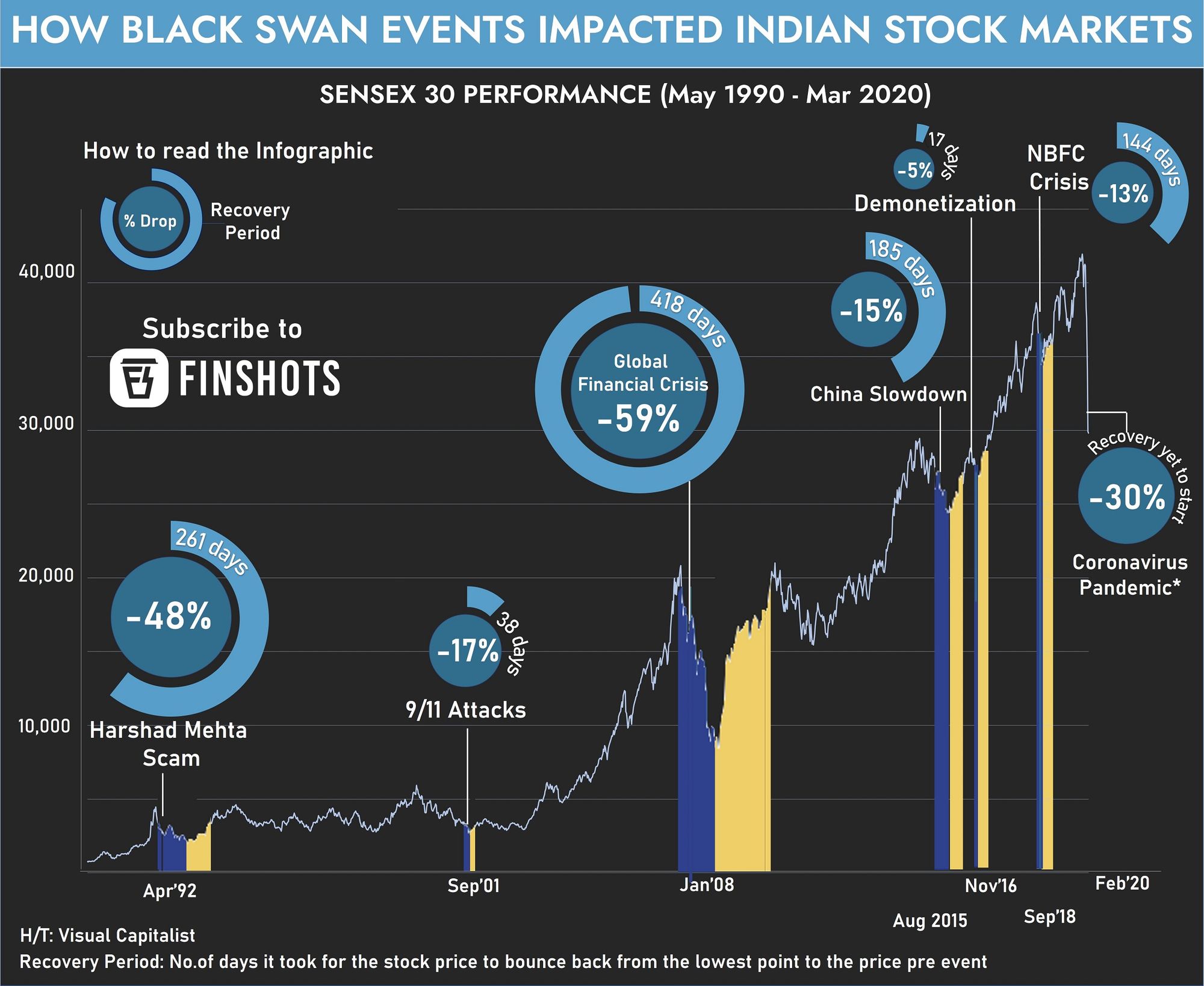 Here's a brief history of the Indian markets rising like the Phoenix after coming face to face with the dreaded black swans.

Finshots
—
Finshots Special: Luckin Coffee and the Anatomy of a Fraud
Share this