Must read folks. Must read!!!

Data is the new Oil

The AGM started with a bang — A massive investment from Google as part of its India Digitization Fund. The search giant was buying into the Jio dream and pundits lauded Mukesh Ambani for delivering another masterstroke.

But one thing stood out. Google got in on the act at a significant discount compared to other partners. They paid ~₹33,700 crores for a 7.7% stake in Jio Platforms whilst Silver Lake, another early investor had to cough up ₹10,200 crores for a 2% stake.

I am not sure if you are doing the math here, but if Silver Lake was buying 7.7% like Google, they would have had to pay ~₹37,800 crores — roughly 12% more than the search giant’s acquisition price — A hefty premium!!!

Now you could suggest that Reliance Jio fleeced Silver Lake. But that would be inaccurate since this disparity alludes to something very different — the nature of their strategic partnership.

Google and Jio Platforms have entered into a commercial agreement to jointly develop an entry-level affordable smartphone with optimizations to the Android operating system and the Play Store. Together we are excited to rethink, from the ground up, how millions of users in India can become owners of smartphones.

For instance, rural consumers are more likely to use UC Web browser because it employs complex compression techniques and loads web content faster whilst using less data. They use websites like SongsPK to download music for free since streaming doesn’t work well on 2G connections. They still use feature phones because even the most affordable smartphones in this country are too expensive.

So if Mukesh Ambani really wants to create a “2G Mukt Bharat”, he has to reinvent the smartphone, including the operating system that powers it. And Google is quintessential to this cause.

Also, this strategic partnership isn’t just limited to Google. Facebook was offered a similar discount for bringing WhatsApp into the equation and pairing it with JioMart.

For the uninitiated, JioMart is an ambitious project — the likes of which you’ve probably never seen before. With JioMart, Reliance wants to connect thousands of Kirana stores to the Internet. They want them to accept orders online, fulfill them, and cater to a much larger audience. Now obviously you could just build an app and force consumers and store owners to transact on this new platform. But that would be a sub-optimal solution. Instead, if you introduce something more familiar, you could increase adoption and engagement rates almost instantaneously.

Familiarity breeds attraction. People take an instant liking to something they already know. It’s called the mere-exposure effect — a psychological phenomenon where people tend to develop a preference for things merely because they are familiar with them. So if Jio was looking to introduce new products and wade into uncharted territories, it would be better off piggybacking on something more familiar. Something like…

After all, there aren’t a lot of applications that are more ubiquitous and intuitive than WhatsApp, right? So if people could buy groceries off their local Kirana stores using the app, that would be a game-changer.

As an article in The Drum notes —

For the longest time, Indian e-commerce has largely been dominated by Amazon and Walmart-backed Flipkart, which controls just over 62% of the market split almost evenly. Now, the Facebook-Jio partnership introduces a formidable third force into the mix. In the long run, this alliance will counter the growth of Amazon and Flipkart, but it could completely disrupt the way e-commerce is run in the world’s largest democracy.

Enabling rural Indian commerce means both Jio and Facebook will have unparalleled insights into purchasing habits, needs and challenges of an entirely new consumer class the world of e-commerce has known least about until now.

There was also another big promise — Jio 5G.

Unlike previous network technologies, 5G won’t just connect your smartphone to the internet. It aims to connect everything to the internet — refrigerators, microwave ovens, washing machines, your TV. Everything!!!

Now experts we spoke to confided that this kind of interconnectedness is unlikely to transpire in the short term — at least in India. But they were still hopeful of leveraging 5G to pursue higher mobile internet speeds. So when Mukesh Ambani stated that 5G would be ready for field deployment next year there was considerable fanfare surrounding this announcement.

However, there is still one problem — spectrum allocation.

Think of spectrum allocation as the government’s way of auctioning radio frequencies (5G airwaves for example). Who gets what is incumbent on who’s willing to pay the most. But the government will set a reserve price — a minimum amount below which you simply can’t bid.

If the government thinks the likes of Reliance and Airtel are unlikely to make a lot of money out of 5G, they’ll set this bar pretty low. However, if they think the telcos are likely to make a killing, they’ll ensure the reserve price stays up.

And the telecom entities have been fighting tooth and nail to revise the reserve price downwards. Their contention is rather simple — “We have too much debt. People pay too little money for our services. You have to stop fleecing us.”

And the government — well, they aren’t budging either. Their position is very clear — India’s market opportunity is massive and it’d be a travesty to sell the spectrum for a pittance. So they want to pursue a high reserve price.

But here’s the kicker. Trials can’t begin unless they resolve this stalemate. Meaning, 5G will remain a theoretical proposition until spectrum allocation concludes. Also, even if they do resolve the stalemate, a higher reserve price will push costs across the board. 5G will probably be much more expensive than any 4G data plan you’ve seen so far. And unless you are really bothered about your 4G network, you are unlikely to make the transition. So despite the fanfare, widespread 5G adoption will probably take some time.

It’s another ambitious project to aggregate multiple content platforms on Jio’s Set Top Box — Netflix, Amazon Prime Video, Disney+Hotstar, EROS Now, YouTube, you name it. All your favourite streaming platforms in one place available with a single login. A masterstroke!!

Of course, success here will depend on pricing, pesky fibre connections, and how people take to Jio TV+. But if Reliance can make the likes of Netflix and Prime Video more accessible, it will do wonders for the content ecosystem in the country.

More paying subscribers translate to better revenues for streaming platforms. A bigger revenue pie means they can reinvest more proceeds. Reinvesting more proceeds will eventually translate to bigger budgets for production houses and maybe it will provide a much-needed boost to an industry that’s currently reeling from the after-effects of COVID-19.

This could potentially be a win-win for all parties involved. But maybe we should wait for the fine print before we get too ahead of ourselves.

Besides this, there were other announcements that also piqued our interest.

And as the AGM drew to a close, I walked away from my computer screen with equal parts optimism and equal parts dread.

After all, it’s hard to overstate Jio’s contribution to India’s growth story. They’ve single-handedly altered the digital landscape in this country and in all likelihood will continue to shape it for many years to come. But as Reliance begins to shape-shift and metamorphosize, they are starting to dwarf competition and subsume entire industries. They are prepping for war with incumbents on both fronts — digital and offline, and they are doing it at a pace that belies all expectations.

It reminds me of another company. What an uncanny resemblance, isn’t it?

Also, if you know anyone who's looking for a quick summary that explains yesterday's AGM, this is the article they should be reading. It's easy on the eye, doesn't bog you down with unnecessary details and offers you a pretty good summary of the most important bits. Come on now. Share this Finshot on WhatsApp, Twitter, or LinkedIn. 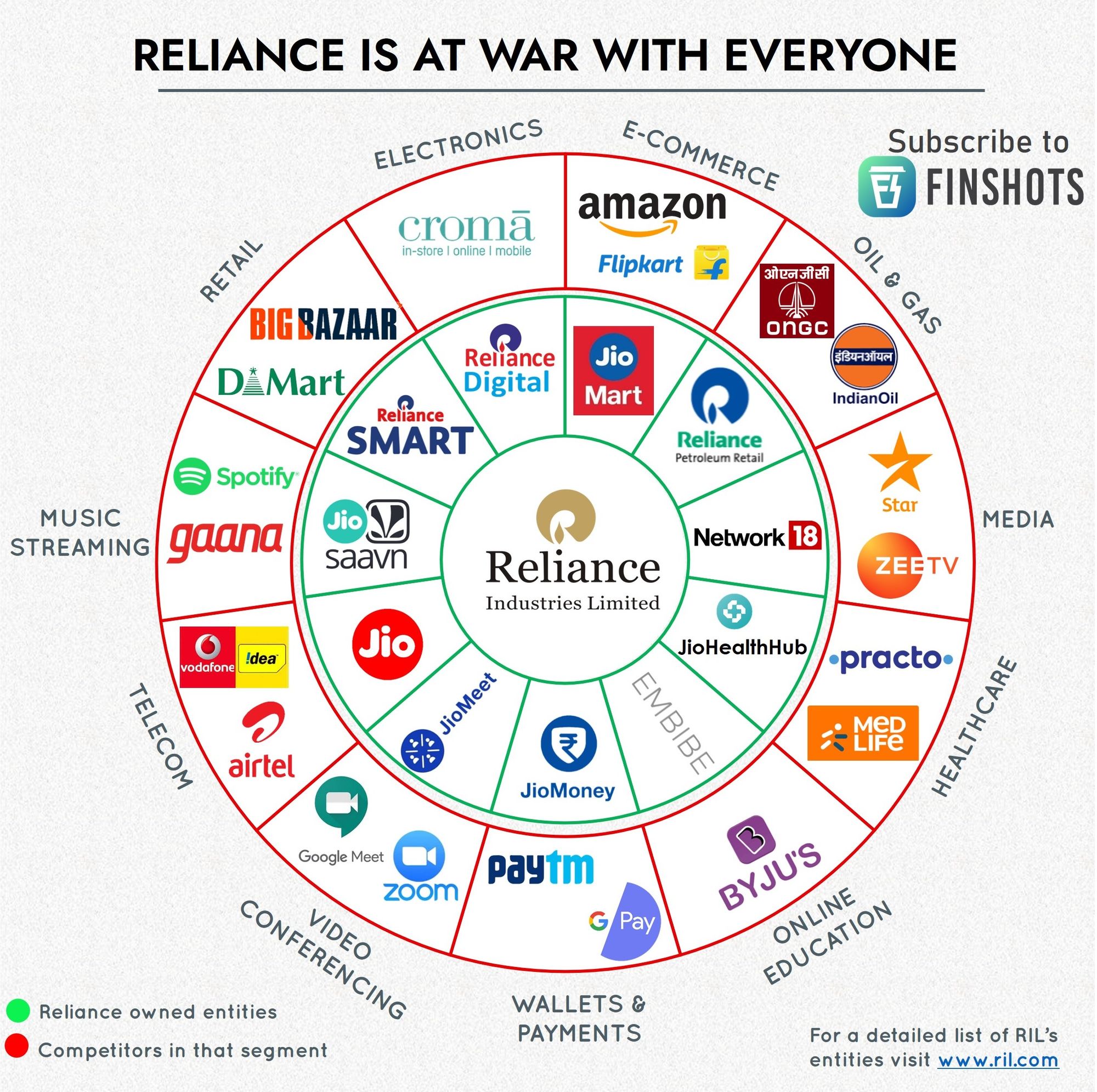 Reliance Industries announced its big plans during their first ever virtual AGM. So, we thought we'd take a look at RIL's massive influence on India's business market ecosystem.

An explainer on the economic impact of pushing international students out of US.

Finshots
—
The Unbridled Ambition of Reliance Jio
Share this