In today's Finshots, we talk about copper, innovation and pink newspapers :)

It’s a sobering headline and it reads —

“Evidence of a looming supply squeeze is mounting on the London Metal Exchange, where (copper) inventories are at their lowest levels in almost 15 years — only enough to last users a little more than a day. A year ago, they would have lasted five.”

And to be fair, it does sound apocalyptic. But like most stories, there is more to this than what meets the eye.

So let’s break this down, starting with the London Metal Exchange (LME). As the name suggests LME facilitates the exchange of metals. But not all metals — only the non-ferrous kind. Meaning you can’t trade steel and iron, instead you’ll have to dabble with aluminium, copper, gold, silver, etc.

On most occasions, end consumers looking to source copper might already have tied themselves to long term contracts with suppliers they already know. But if you don’t have the right connections, you can always buy and sell copper on the London Metal Exchange. You could do future contracts — where you agree to buy or sell copper at a later date. Or you could do spot contracts — buy and sell this stuff on the spot.

And the problem with copper right now seems to be isolated to the spot market i.e. if you wanted to buy copper this very moment, you’d probably have to shell out a lot of money.

So how did it get here?

Well, you could blame China.

The Red Dragon has been pumping out cars, smartphones and electric cables ever since emerging out of the lockdown and key manufacturing hubs are buzzing with activity. So the story goes that supplies were being driven to China because the demand has been rather overwhelming these past few months. Also do note the recovery in China preceded recovery in other parts of the world. So they had a veritable advantage in sourcing key supplies.

Even private traders elsewhere seem to be hoarding copper fearing a fresh wave of coronavirus reinfections. After all, if future lockdowns cripple supply chains once again prices could reach stratospheric levels. It’s not a very enticing proposition. So best hoard reserves now, right?

Well, yes. But that creates a problem everywhere else — like at LME. In any case, as prices keep increasing, some of these hoarders will eventually relent. They’ll start offloading some of their inventory and the supply crunch should ease rather quickly.

So is the world running out of copper?

Not quite. But if you’re trying to source copper on the spot right now, you might have to pay a premium.

Also, point of interest: Most buying and selling at the LME involves financial traders. Meaning these folks are betting on the price of copper. They don’t actually need the physical stuff, okay?

The Myth about Innovation

T. S. Eliot once wrote that the immature poet imitates and the mature poet plagiarizes. His words eventually metamorphosized into one of pop culture’s most famous quotes— “Good artists copy, great artists steal” and was even attributed to Steve Jobs at one point in time.

He never said it actually. He thought he was quoting Picasso. But Picasso never said it either. Nobody knows who really said it first, but the quote does pose a very interesting question — Is innovation simply a byproduct of imitation, or is there more to this story?

So in today’s recommended reading, we are suggesting another excellent article from Malcolm Gladwell on the Creation Myth — What drives innovation, really?

We get a lot of love from our subscribers. And truth be told, we are forever indebted to you lot. But sometimes, this expression of love can take a rather interesting turn. For instance, yesterday one subscriber wrote — “I don’t read your mails every day but I would feel nauseated at the sight of the pinking brown paper — economic times & other economic-related newspapers! This is a big deal for me”

We know it’s an odd compliment but we will take it with pride. However, it did get us thinking — Why are financial newspapers pink?

Well, to truly understand the genesis of this peculiarity, you have to go back to 1893.

Financial Times is an up and coming newspaper. They are trying to stand out from the competition. So the management decides to switch things up. They make subtle changes to the newspaper and add a slight hue. As the paper put it — “In order to provide outward features which will distinguish the Financial Times from other journals, a new heading and distinctive features will be introduced, and the paper will be slightly tinted.”

Also technically they weren’t adding colour. Paper is just many shades of brown since it’s derived from wood pulp. You’d have to cook it and bleach it to make it white. But if you stop the bleaching midway, you might actually be left with pink paper. Ergo, it's actually cheaper to produce this stuff. And believe it or not, many newspapers followed suit to make sure the financial/economic variants of their newspapers looked distinct from their primary offering.

There’s also this other cool fact that the pink in the “pink newspaper” might actually not be pink at all.

As an article in the Quartz notes —

Some, including the newspaper itself, prefer to call the current version “salmon pink.” Asked to weigh in on the matter a few years ago, the Pantone Color Institute suggested “bisque” was a more appropriate descriptor.

FT.com, the newspaper’s website, draws its background with the hex value #fff1e0, which is most accurately seen as a shade of orange. The specific color doesn’t have a name in the specifications for HTML, but some that are close to it are called “blanched almond,” “old lace,” and the most descriptive of all, “papaya whip.” 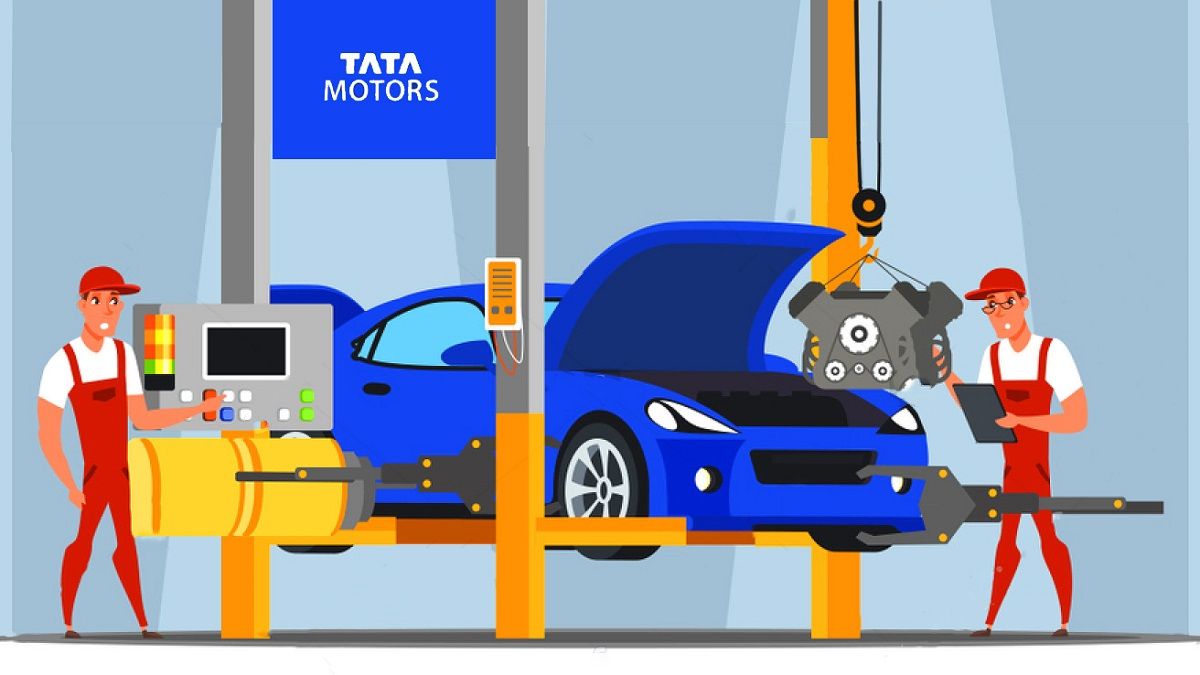 An explainer on the Tata Motors debt problem 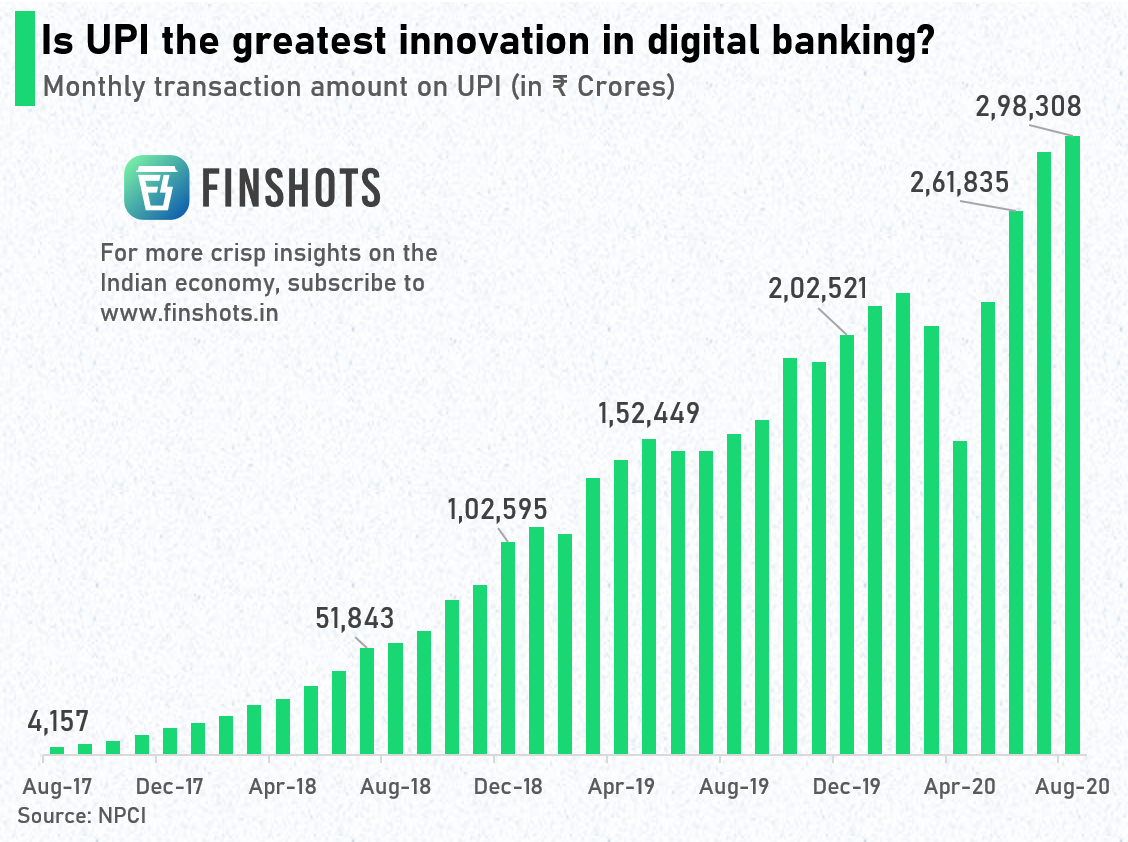 Visualizing the growth of monthly transaction amount on UPI.

Finshots
—
Is the world running out of copper?
Share this